This is a little story all about how I ended up travelling across the Pyrenees in a little yellow train and how it all went terribly wrong.

When it comes to travel planning, normally travel from time to time doesn’t go to plan. Normally it’s only a matter of time until you hit a fork in the road.

After all, that’s part of the fun of travel, planning for the unexpected.

For those readers who remember, last year I decided to take on a challenge to visit 30 countries in 30 days by rail.

I decided to start off my adventure in Spain in the Costa Brava region and decided to head north to Paris.

I had an itching urge to visit Andorra as one of my countries to visit on the challenge before I headed up to Paris that day.

The only problem was I hadn’t figured out how this was possible by train.

After a few googles I was still confused with what to do and decided to just go on a unplanned whim.

Book Mallorca, asked me this very question: “What’s your most unusual experiences from your past travel adventures.”

This story I’m about to tell you was the first to spring to mind when asked this question. I’m now going to share with you, how it all unfolded.

Lets go on an adventure to Andorra! 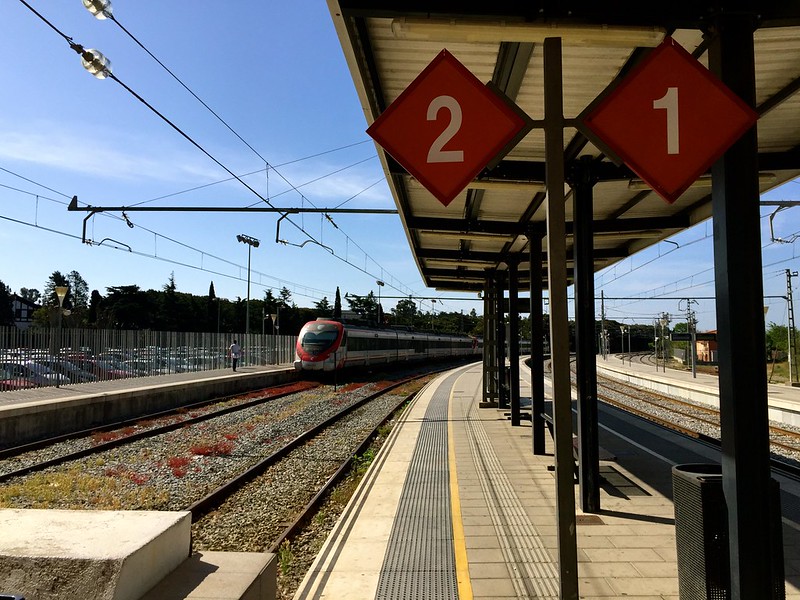 What a great idea I thought! I’m trying to visit 30 countries in 30 days by European Rail, using an Interail pass. A quick stop off in Andorra, would help towards my challenge goal.

Toulouse was the destination to aim for in order for me to reach Paris that day.

Looking at a train map I noticed a little rail line that linked the boarder of Spain and France with Toulouse that also happened to pass by Andorra on the way.

I thought Perfect! I’ll jump on this and then Andorra looks close, there must be some sort of easy way to reach Andorra, next country on the challenge.

A random unexpected trip to the Pyrenees.

When I reached the train station that the map was referring too, I couldn’t see any train in sight.

All I could see was a Yellow train with no roof that looked more like a toy train than a real train.

Low and behold, that was the train that would get me to the next destination.

Travelling along the scenic yellow train route of the Pyrenees 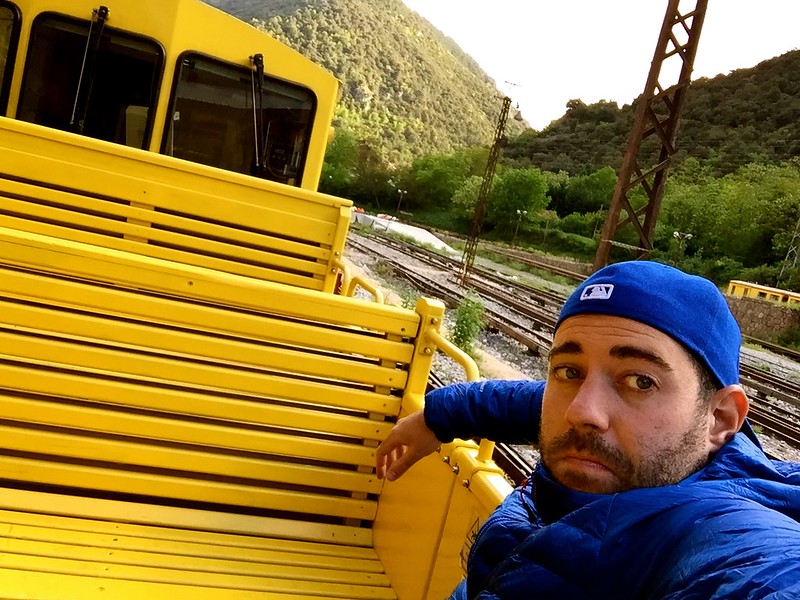 The journey starts from Villefranche de Conflent and ends up in Latour de Carol.

Looking at a map from point to point it looks like the journey could be a few hours max.

Oh boy was a wrong! 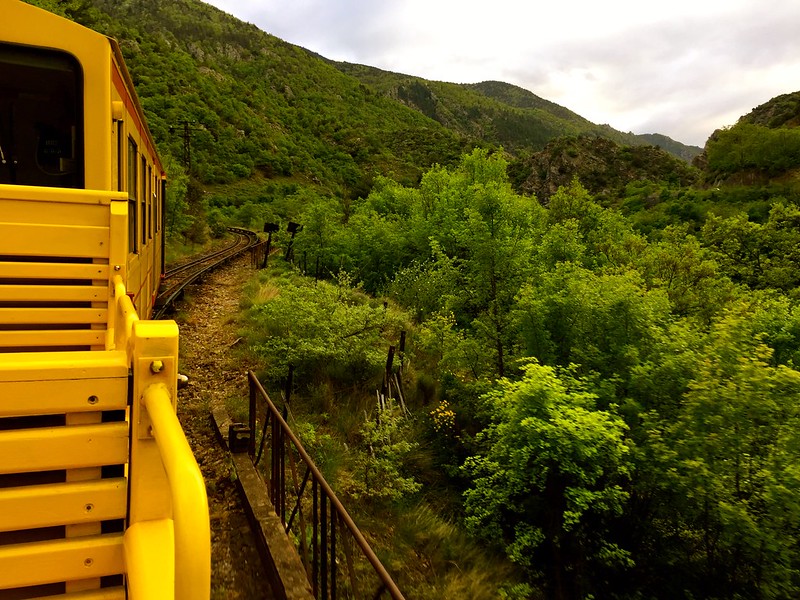 The train and track was built as a scenic route to enjoy the landscapes of the Pyrenees, and that’s what I pretty much did.

The journey started out to be incredible. The views jaw dropping, I couldn’t actually believe my luck.

What was simply going to be another train ride turned out to be a spectacular journey through the Pyrenees as the sun started to set. 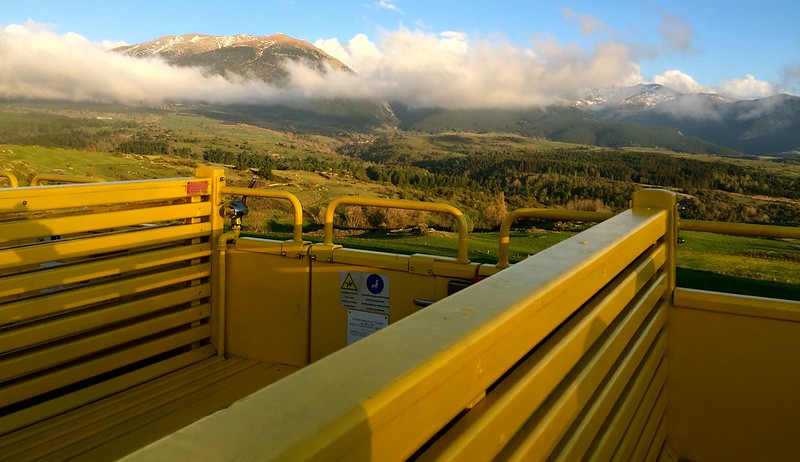 I pretty much had this little mini Yellow train all to myself throughout the whole duration of the journey. 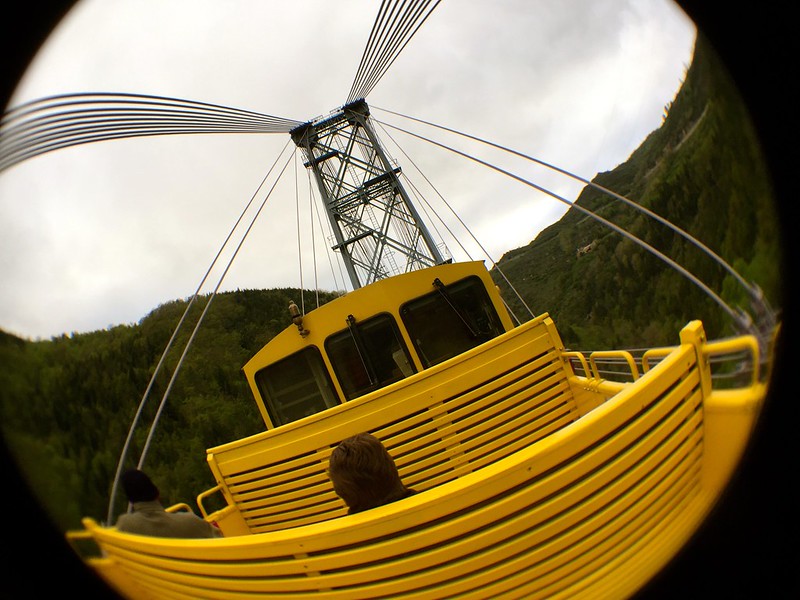 The train would swirl through mountains, suspension bridges and tunnels, it was like being on a little private mini train set. 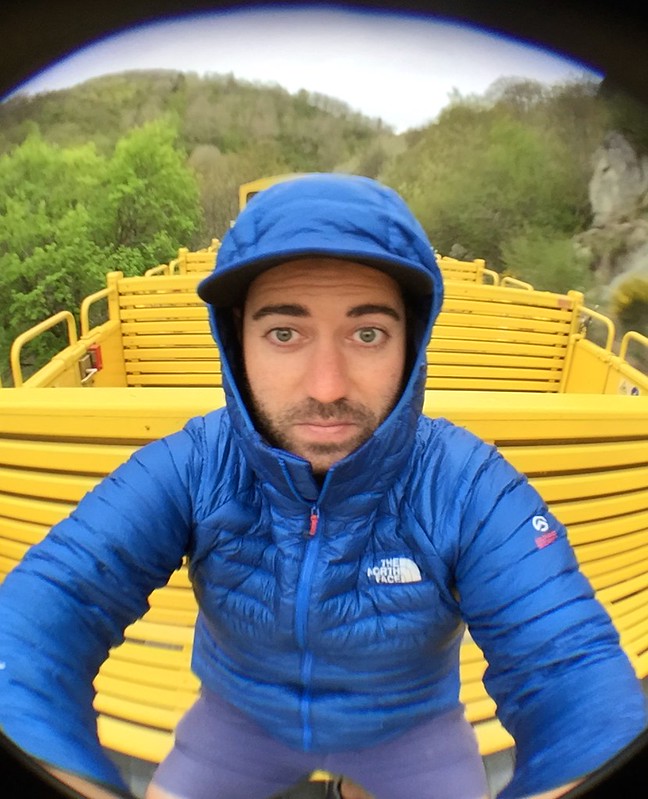 I did laugh to myself as it was such a random bizarre situation.

This was a tourist train not a commuter train

We would pull up to these little tiny communities of 7 or 8 houses and no one would be at the station so we wouldn’t stop and keep on going.

The train isn’t very frequent, but we were heading towards some extremely hard to reach locations and it took forever. The further we went the more remote we were going. 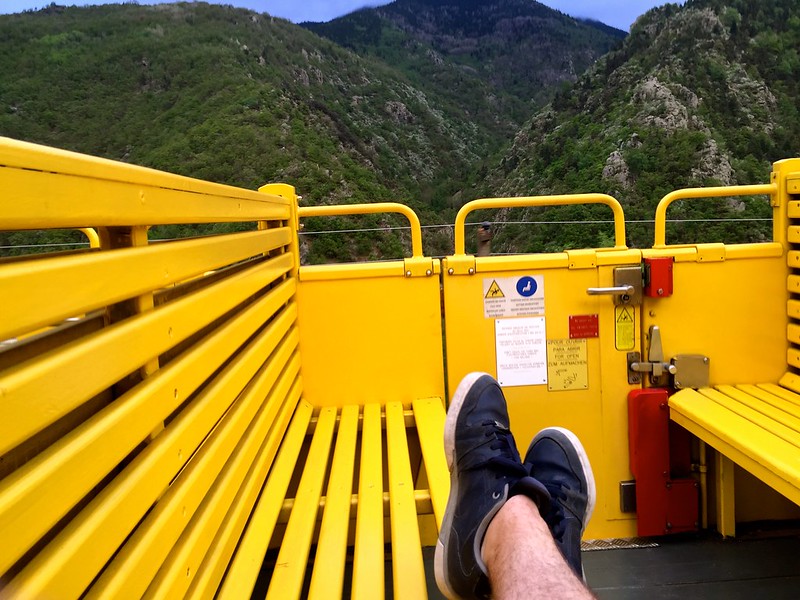 After a few hours I looked at the name of the next tiny station and then looked at the map and realised that I hadn’t really travelled that far within the few hours we had been travelling.

The train was going extremely slow and we hadn’t made much progress.

I was enjoying this mini yellow scenic toy train through the Pyrenees at first, but as the journey become longer, it seemed like it would never end!

The sun started to set and the temperature started to drop, we were up in high altitudes and it started to become very cold.

Normally with wouldn’t be an issue, but bare in mind the train didn’t have a roof! 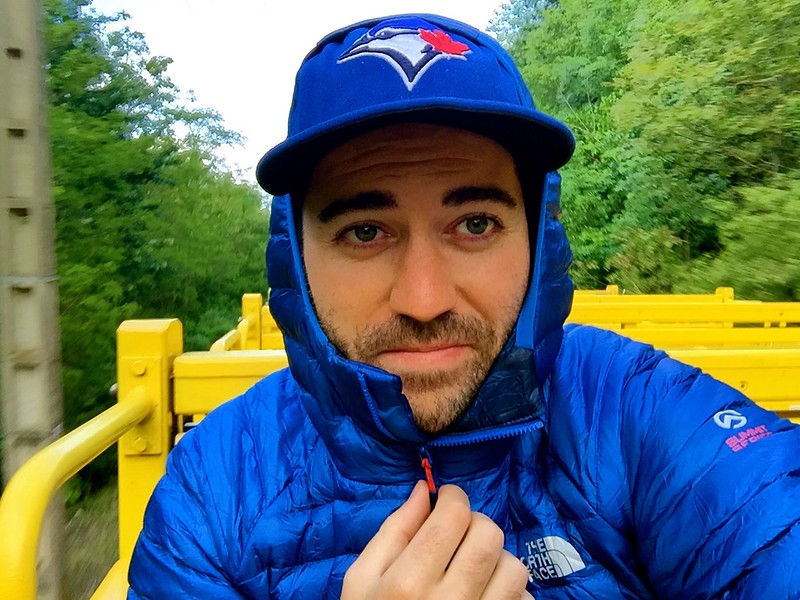 I remember we started to pass a roadway and cars were speeding past us, it was like I could have walked quicker on foot.

We continued to weave in and out of the mountain tops and darkness was upon the horizon.

With no roof I huddled into my jacket trying to keep warm.

At the next station the driver stopped the train and let me sit in the carriage up front. 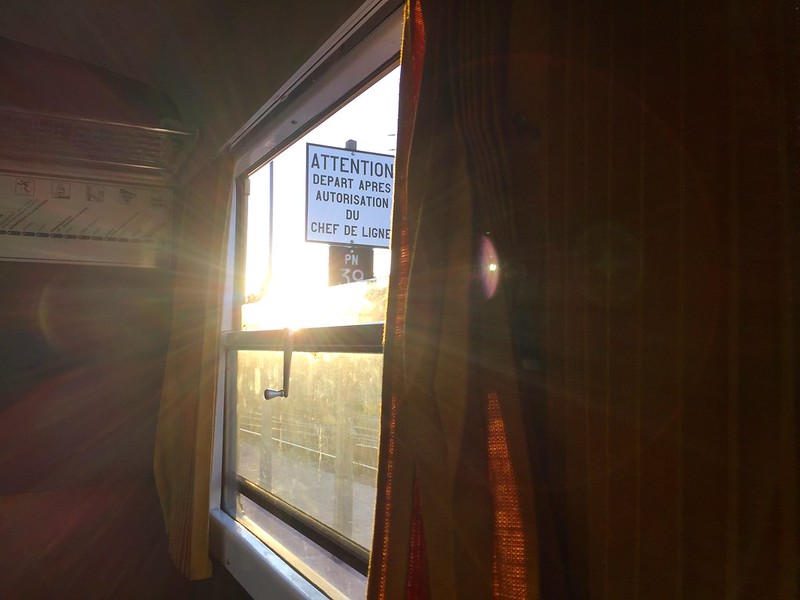 I’m not sure he had ever had a passenger on board who attempted to do the whole route in one go.

He was kind of in shock with my travelling choices, about at that this point, so was I!

Onwards we went, it was dark and it was cold outside.

It was at this point that I knew that I wouldn’t be able to make it to Andorra that night, I had underestimated this train route completely.

What simply looked as a quick train trip that would take no longer than a few hours, ended up becoming 7 hours in total. 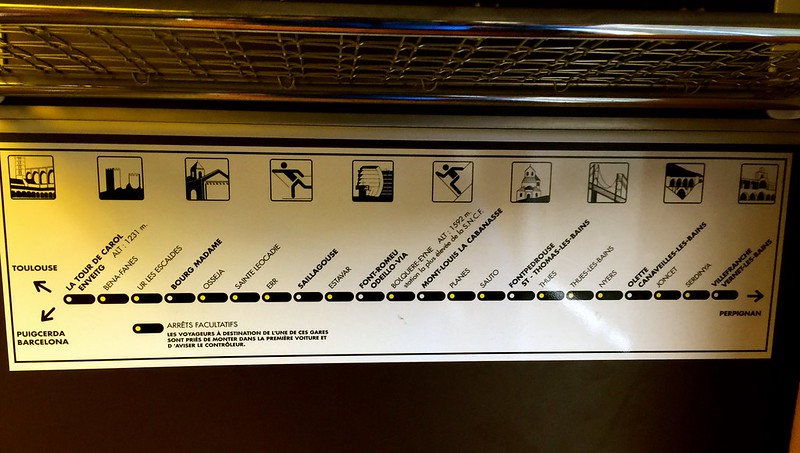 We finally pulled into Latour de Carol station, the clock turned midnight and the driver didn’t even bother to lock the train, he sort of shot off and I was left on the station alone and confused.

I went to check the departure board, but the whole station was closed up for the night.

I was stuck in Latour de Carol.

After walking around Latour de Carol I accepted my fate.

This was the last train of the day arriving at the last stop along the route.

I had planned my hotel for the night in Andorra because I thought I could make it on time.

Indeed it was Latour de Carol where I would be sleeping for the night. 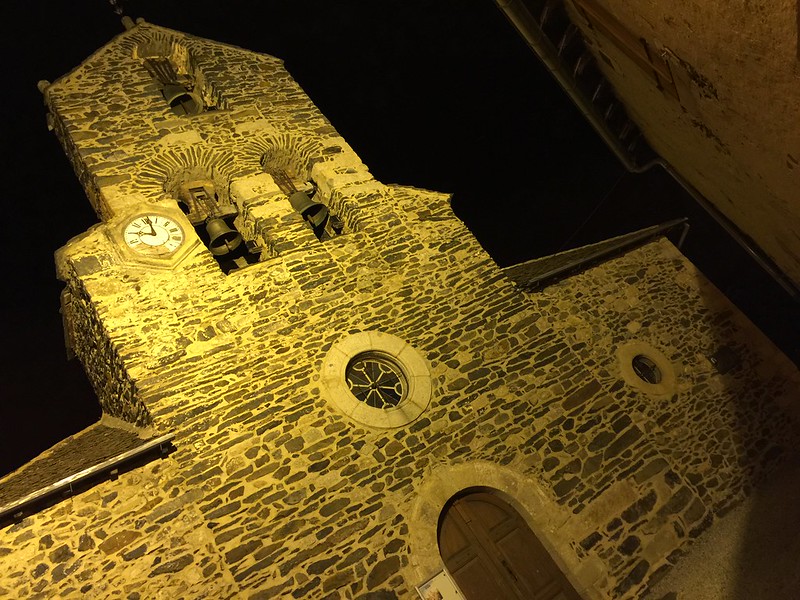 After walking into town, I quickly discovered that everything was closed and I couldn’t find any life at all.

I do remember it was a pretty mountain side town with lakes and a hillside church. 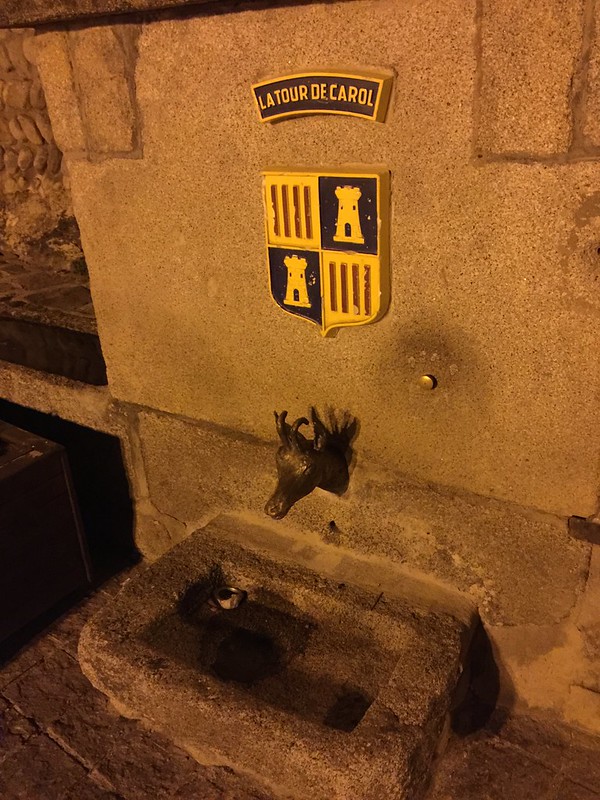 It was almost 1am by this point and nothing was open so I headed back to the train station.

It was the doorway of the train station where I would spend that night with no other option on the table. This was my only option, I had no choice.

I was so high up in the Pyrenees that the temperatures went below 0 and I was stuck to huddle in a doorway waiting for the first bus out first thing in the morning.

Waiting for the first transportation out.

I was so happy to see the first bus arrive at 4am in the morning. As the door opened I leaped on board and enjoyed the buses central heating straight away.

I was really worried I wouldn’t be able to make it through the night as I had run out of layers and the cold was becoming difficult. 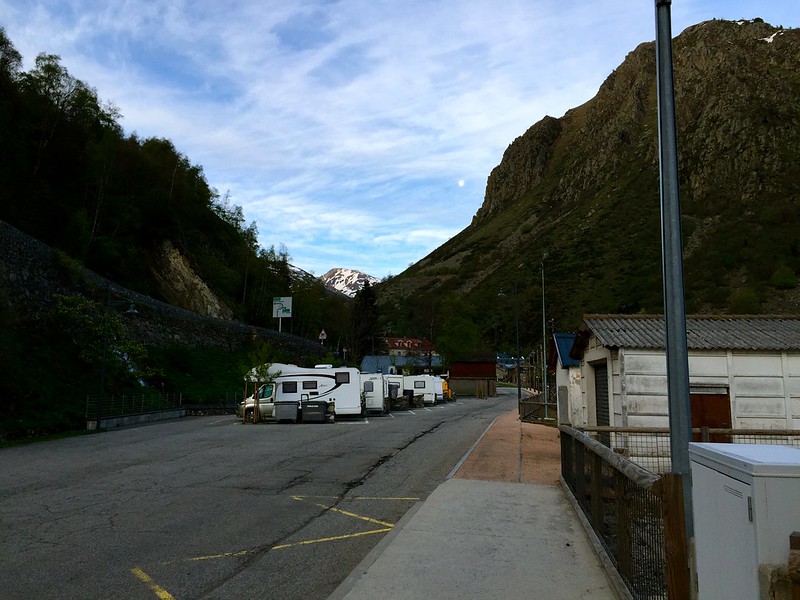 Once the bus was on the move, I was a little confused about why a replacement bus was going to Toulouse instead of the train. I thought it was a morning thing and didn’t take much notice. 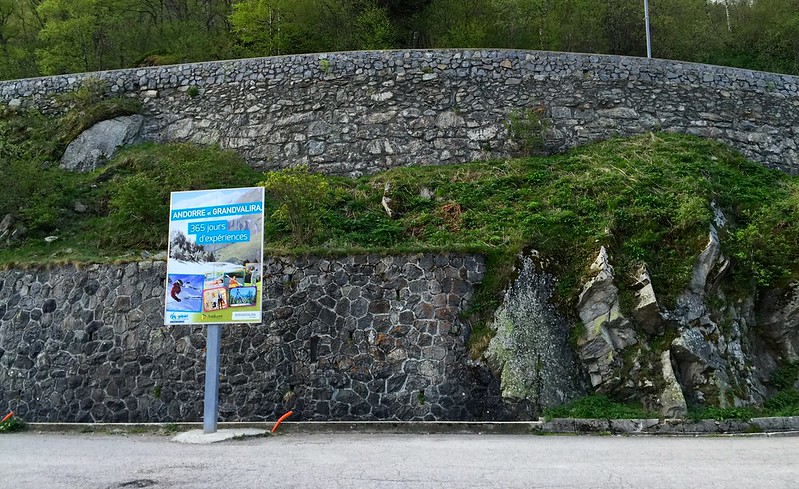 I was quick to learn that the train line that connects Andorra is no longer in service and in fact the track had started to rot away, I noticed this on closer inspection.

The bus I happened to be on was a replacement for the line and it no longer goes to Andorra.

Funny as the station happily advertised Andorra on a close by billboard but without the train track it would have been an additional 3 hours hitch hike and I simply had no energy remaining after the rough night.

After a long journey from the night before and a crazy nights sleep in a freezing door way, I was to learn that a trip to Andorra was off the cards and was no longer possible.

A train was waiting for me on the platform when I arrived to Toulouse, it was a high speed train to Paris. After the night before I had to grab it!

I was back on track with the adventure.

I was heartbroken to learn my fate that after this crazy long adventure through the Pyrenees and a sleepless night, I would not be able to visit Andorra.

I was exhausted to be honest and a high speed train all the way to Paris where I could check into a hostel and have a nice hot shower sounded lovely just the ticket at this point!

Moral of this story and what I learned.

It was a risk at the start to head to Andorra without a plan in the first place and it didn’t work out in the end.

What did happen though was I was able to explore the Pyrenees region on an incredible scenic train ride that was a once in a lifetime experience.

In life you win some but you lose some and looking back, at least I have this incredible story to tell and it wasn’t just another boring day.

Heres to more random adventures, getting lost and having fun! Andorra, we will meet another day, just not today!

You can watch a video I put together of the whole adventure through the Pyrenees, enjoy!

Thank you for reading!

Appreciate you coming on by and reading my latest blog post about my random adventure through the Pyrenees.

Have you gone on a random adventure that didn’t go the way you planned?

Thank you for your time and happy travels!