Gyoda is located in the prefecture of Saitama, and it takes around an hour by train to get there from Tokyo station. It’s a perfect day trip destination to arrange from Japan’s capital.

Gyoda is rich with traditional history and culture and offers also a variety of local dishes worth trying on your visit.

It’s easy to arrange a day trip and with loads to offer over one day. Here are a few of my must-see and do attractions in the city of Gyoda. 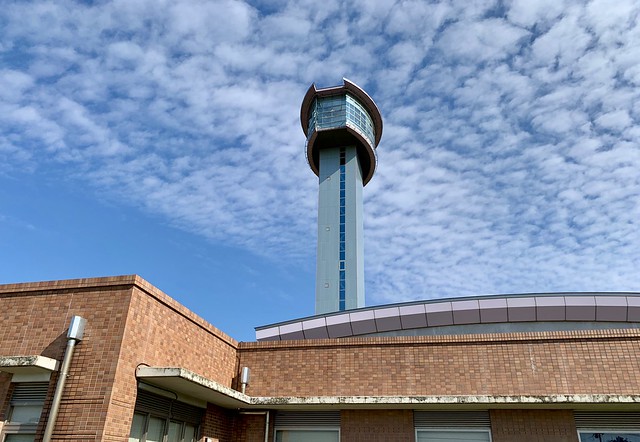 Gyoda city is most famous for holding a Guinness World Records title for the largest rice field mosaic in the world.

The rice field art designs change frequently so you never know what you might see on your visit, each experience is different.

For the best view, head up to the top of the purposely built observation deck of the Kodai Hasu no Sato building.

The views from the top can be stunning on a clear day as you get to see the surrounding city of Gyoda, the rice fields and the lovely landscape. Well worth the trip to the top of the observation deck. 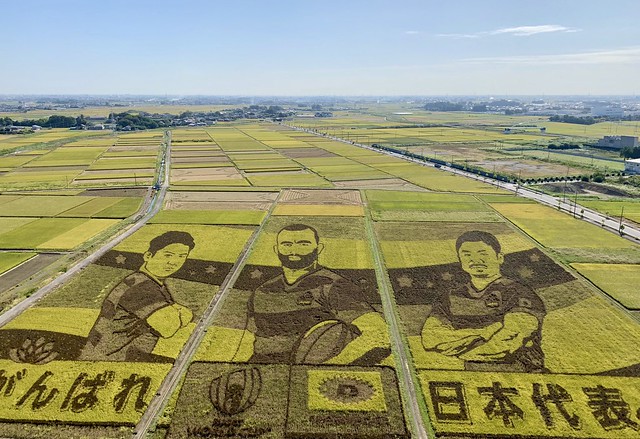 During my visit, I could see the rice field art created especially for the Rugby World Cup 2019 tournament which has been held across Japan.

The rice field art was of some of the players from the Japan rugby team which was rather timely as the games were still going on.

They have a purpose-built tower to see the rice field art displays from high above and they regularly change the designs of the rice fields so it’s worth visiting to check out what display they have at the time of your visit. 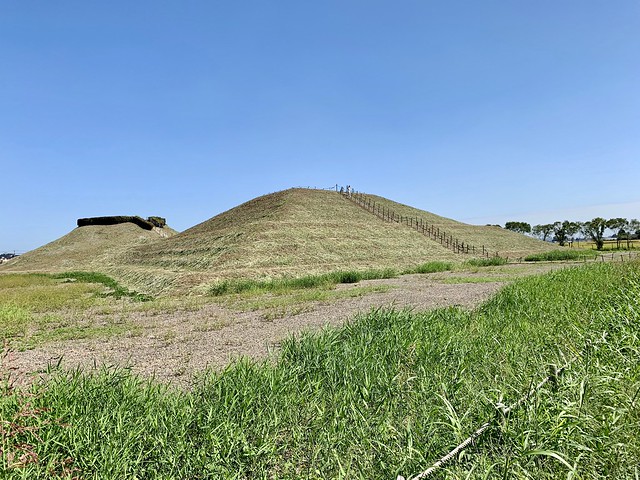 Sakitama Kofun Park has a collection of ancient Japanese burial mounds called kofun which can be found on the outskirts of Gyoda city.

The best way to reach the area is to rent a bicycle for the day from Gyoda train station, and this will allow you to reach the observation deck as well.

You can find the ancient burial mounds across all of Japan, and they say that they have more Kofun locations than Seven-Eleven stores in the country. It just goes to show the incredible volume of these historical locations.

Kofun (burial mound) is a type of ancient tomb characterised by the presence of large mounds. They were constructed across Japan during the mid-third to the seventh century, a period known as the Kofun period. (Tumulus period).

However, Gyoda has some of the finest collections of Kofun you can visit in Japan as they have been carefully restored and reconstructed in recent years to turn into a historical visitor attraction. 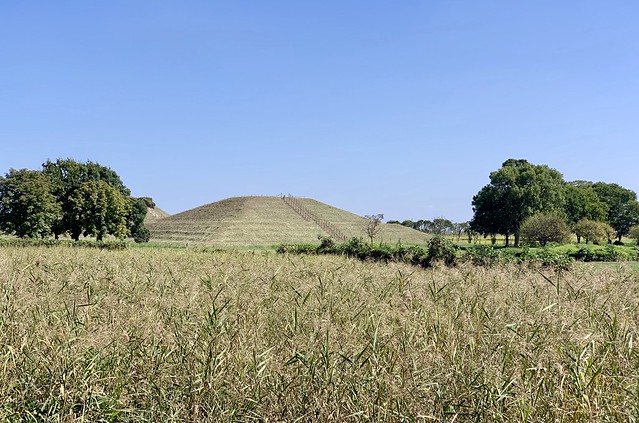 Sakitama Kofun Park has one of the largest clusters of burial grounds in Japan, and it’s located in Oaza Sakitama in Gyoda city. In fact, the prefecture got its name “Saitama” from the Sakitama District, now known as Gyoda city.

Eight of them are keyhole-shaped mounds, all surrounded by rectangular double moats. Each with its features.

The Inariyama Kofun is where Tekken (Iron sword) with an inscription of 115 characters was unearthed (more about that later). 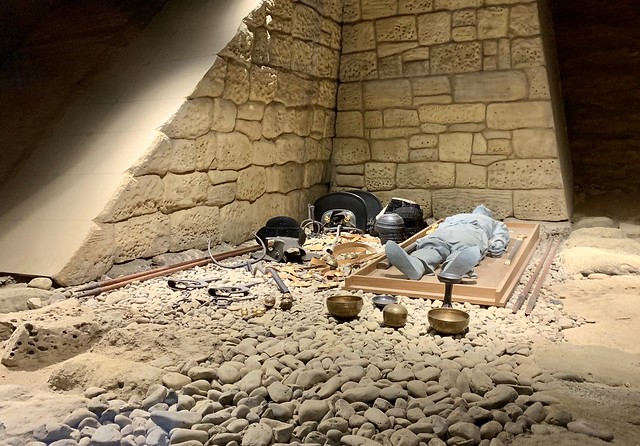 At the Shogunyama Kofun, many funeral objects influenced by the culture of the Korean Peninsula have been excavated.

These mounds are believed to have been created over a 150-year period, between the latter half of the fifth century and early seventh century.

The Inariyama Kofun, the Tumulus (Kofun), which totals 120 meters in length, is surrounded by two rectangular moats. This is considered to be the earliest of a series of Kofun built in Saitama ancient burial mounds and is believed to have been created in the mid to late 5th century. 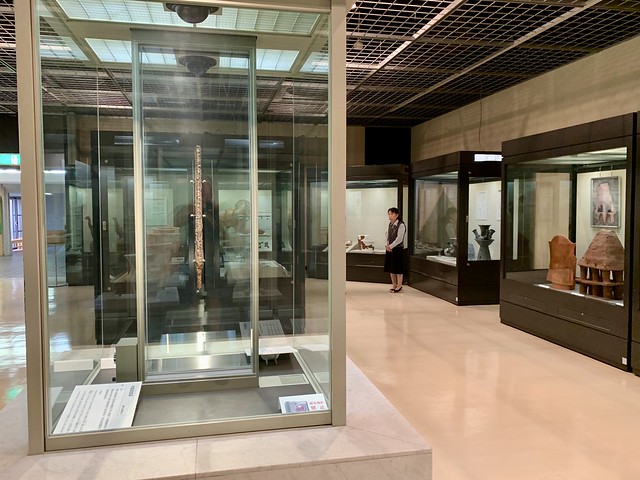 Also worth a visit is the Saitama Prefectural Museum of the Sakitama Ancient Burial Mounds. Here you can learn more about history and items found in the burial mounds.

It’s an interesting display that helps explain the time map of how and why the kofuns were created. 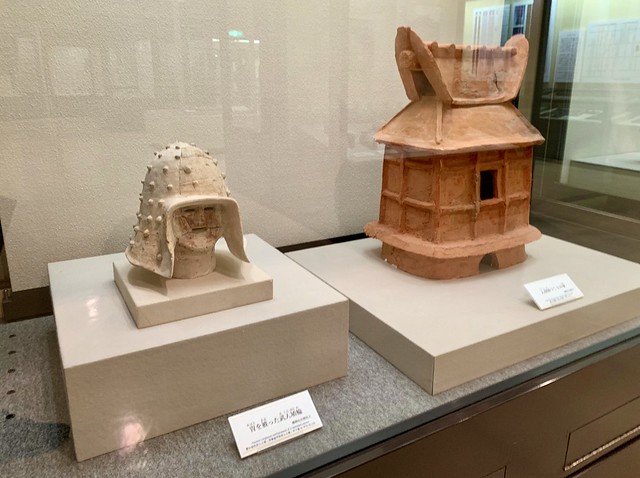 Here you can see the Japan national treasure piece of the Inariyama Kofun called the Gold-inlaid Iron Sword which is on display here in Gyoda. 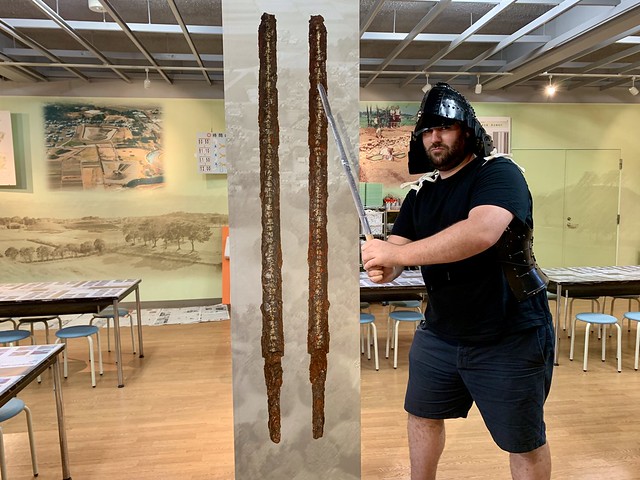 In 1978 archaeologists conducted conservation treatments on metal artefacts excavated from the Maruyama Kofun to keep them from rusting any further than they already had. 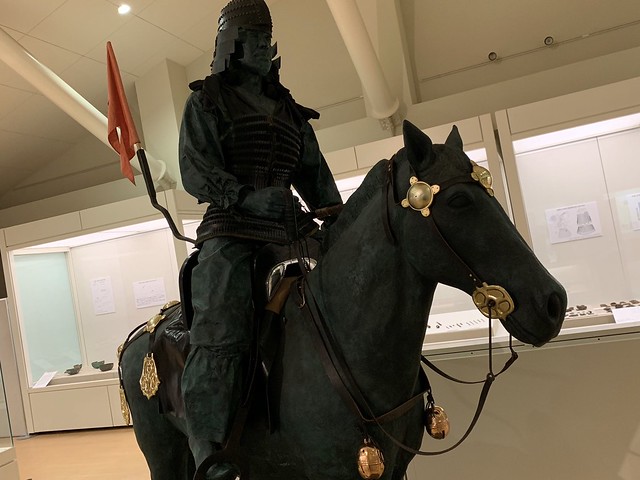 The characters explained that the sword belonged to a warrior called Wowake and listed eight generations of his ancestors. The sword was created to commemorate King Wakatakeru.

The sword helps to understand the formation of Japan through the valuable clues of powerful family names mentioned on the sword.

Try the local jelly fries and Tambo at Kanetsukido 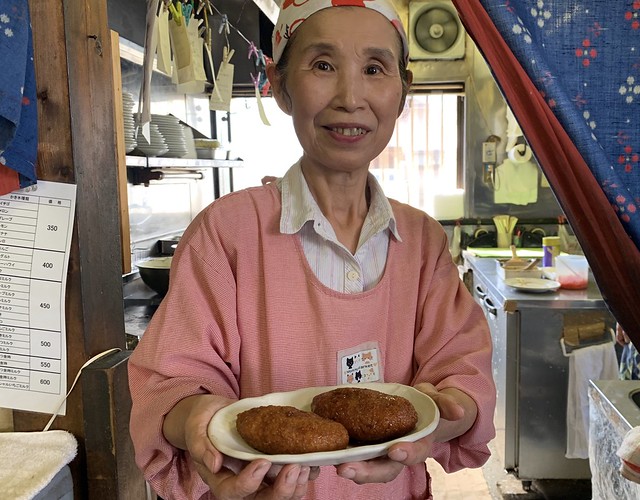 Now you’re in for a real treat! A trip to Gyoda city wouldn’t be complete without first trying the popular local dish called jelly fries.

Even the city uses this dish to create a local mascot character to use for tourism promotion! It’s that popular of a snack about town.

I would recommend heading to a traditional vendor which has a lot of character and charm to try the jelly fries, and that shop front is called Kanetsukido.

The lovely ladies that look after the store here make a great batch of jelly fries and offer warm and welcoming hospitality. You will feel right at home whilst enjoying your first taste of jelly fries. 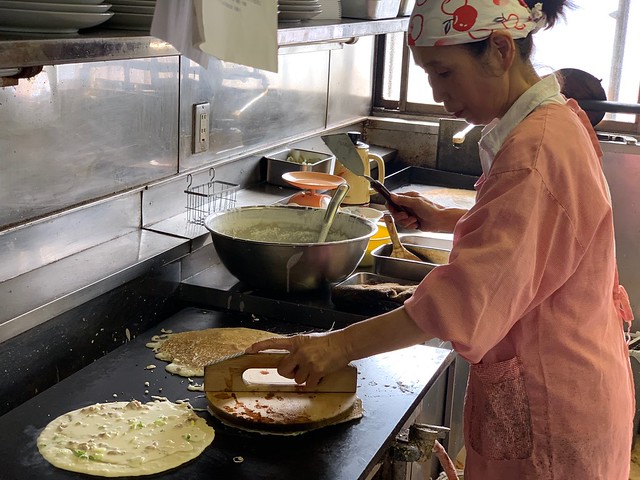 Jelly fries are mainly made of okara, or Japanese bean curd, which gives the goody its gooey texture. The curd is sometimes mixed with vegetables and potatoes, which makes it a filling snack.

The best way to explain it is for you to try this dish for yourself on your visit to Gyoda city. It has to be done! I found it to be similar to a deep-fried crocket you would find in the Netherlands, covered by sweet soy sauce. 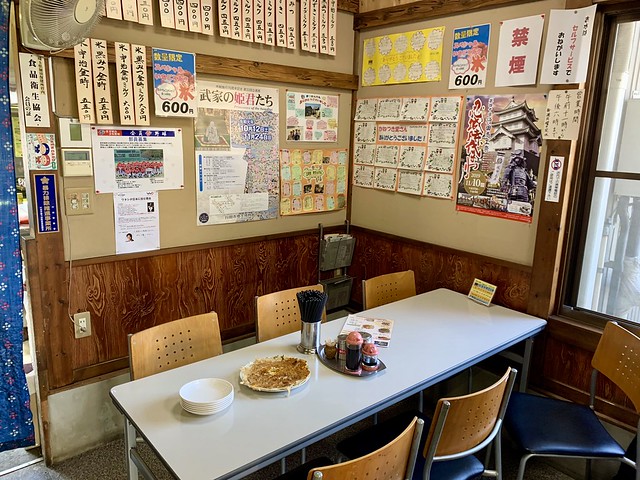 Another popular dish to try in Gyoda is the Tambo which is considered to be the best friend of the jelly fry. It’s sort of similar to an okonomiyaki dish like savoury omelette pancake which is also rather good and tasty to try.

Kanetsukido also does a favourite sweet treat called shaved ice which is topped with locally grown strawberry sauce and cream to add that incredibly delicious taste.

One thing is for sure, you won’t go hungry in Gyoda city with all these tasty snacks and treats on offer. 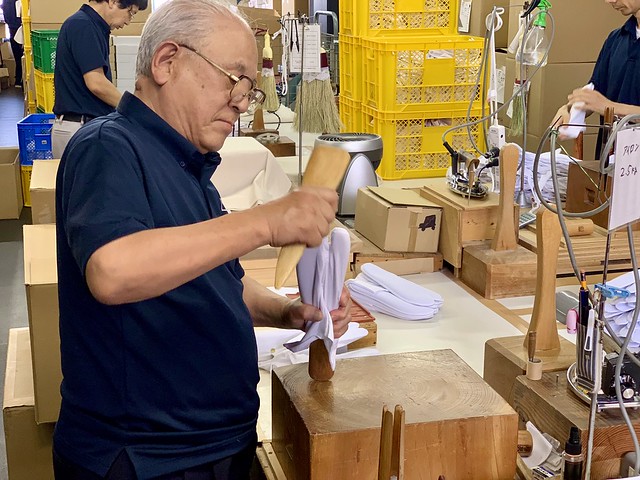 Gyoda city was the largest producer of tabi socks in the peak of the Showa era. The tabi industry faded away with the popularisation of nylon socks.

Gyoda city still houses many tabi related buildings constructed from the Meiji to Taisho era, including tabi warehouses that were used to store finished tabi stock and tabi shop-offices.

Kineya Tabi is one of those traditional companies that remain in Gyoda and is still keeping the tabi sock making tradition alive in the city. 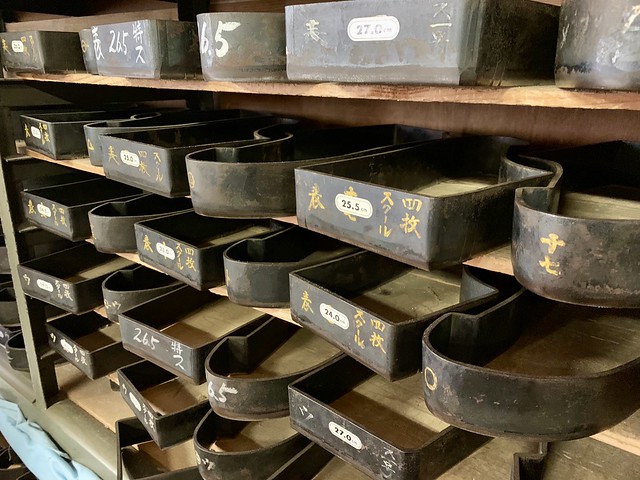 You can call them up in advance to arrange a factory tour to have a look at their traditional operation as well as see the historical machines that have been specifically built to tailor-make their tabi socks.

You can witness the craftsmanship still present in the techniques that they have preserved for the old way of tabi sock making for generations to come. 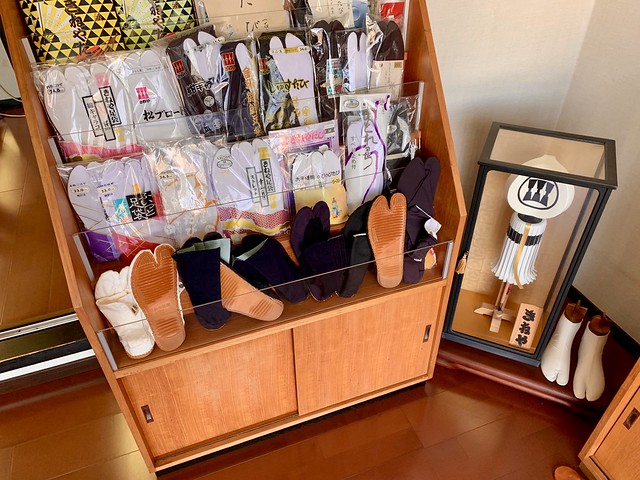 Now, most of the old tabi industry buildings around the city have been transformed into local restaurants, houses or shop fronts and we will visit a few of those later. 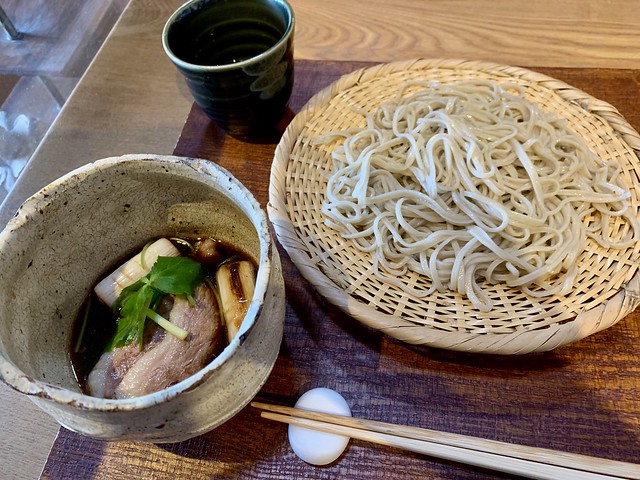 ANDO is a local soba noodle restaurant which is located in one of those old renovated tabi sock barns I mentioned previously.

It’s since been transformed into an intimate dining establishment with a great focus on well-selected ingredients, unique dishes and wonderful soba noodles for you to enjoy.

Ando (which is named after the symbol &) is a cosy establishment which does an incredible soba noodle set lunch.

I would recommend ordering the duck and tempura which is also a great choice at this spot. Be sure to check out this restaurant along your cycling route in Gyoda. 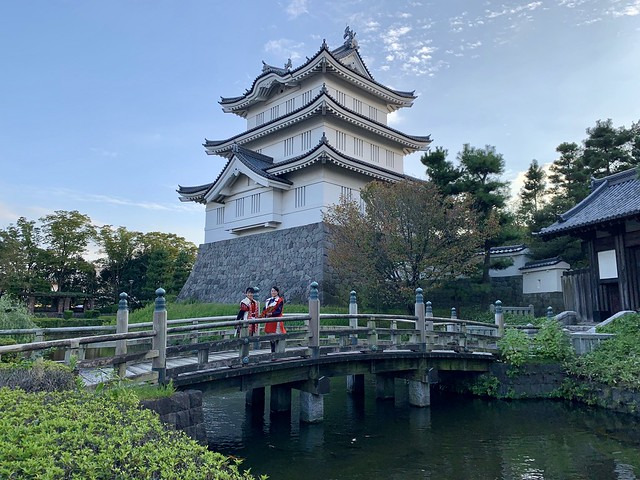 Oshi Castle is located in the city of Gyoda, and it’s great fun to explore the grounds on a guided walking tour with the in-house samurai.

Oshi Castle is a beautiful castle which was recently renovated to create a visitor attraction and historical exhibition within the building. It’s also nice to walk around and explore the grounds with its a charming display of bamboo and surrounding moat.

Oshi Castle was recently used as a filming location for a movie, and you can arrange to have a guided tour with the samurai that featured in that movie which adds to the wonderful experience of visiting the castle.

Also, be sure to check out the exhibition inside that will take you up to the top of the castle and explains the history of the city and the castle more in depth throughout the years. 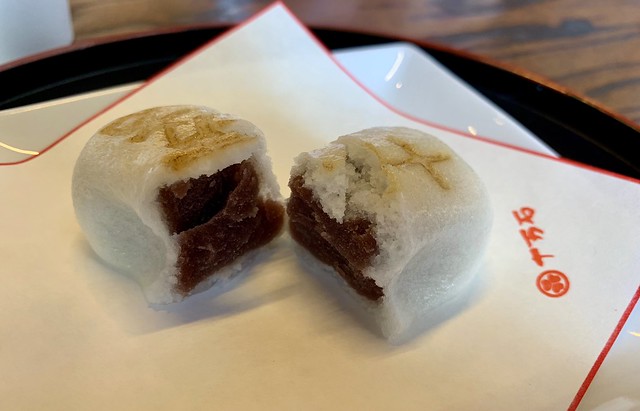 Explore the ancient shopping street close by to the castle. Here you will find old houses and shop fronts that line the street and can be dated back to old times.

Along the street you can find the popular snack Jyumangoku manjyu to enjoy which can be found in the cake shop.

It’s a traditional sweet treat that is bean paste covered by rice flour and goes wonderfully well with a strong bitter green tea.

Thank you for checking out my guide to Gyoda 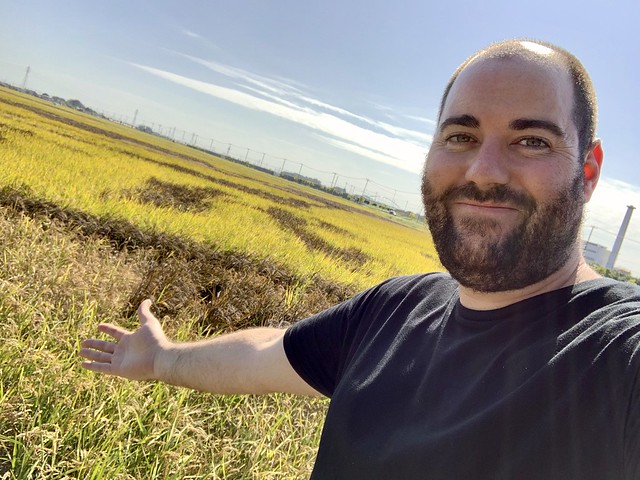 Thank you for reading my blog post all about visiting the city of Gyoda in Saitama Prefecture, Japan on a day trip from Tokyo.

I hope you found this guide useful and you’re looking forward to visiting Gyoda yourself in the close future.

If you need any help with anything, feel free to send me a message. Happy travels!